After years fighting for a table at the local coffee shop, Aleks Horvat had had ENOUGH. The cheap wooden chairs nearly ruined his back, the chatty neighbors were a constant distraction and he was over trying to figure out what to do with the laptop when it’s time to pee?

In 2004, before “coworking” was a thing, he took matters into his own hands and opened theOFFICE. With interiors by Serena Walther Leventhal, ergonomic furniture and finishes by Tony Schubert, and feng shui consulting by Master David Cho, theOFFICE is the ideal workspace for anyone looking to focus, work in comfort, and leave their laptops unattended while going to pee. 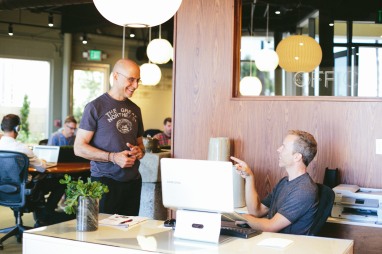 Filmmaking credits include Campus Man (RKO/Paramount) which he co-wrote with Matt Dorff, and the independent features Kissing Miranda and Sweethearts (Lionsgate), both of which he wrote, produced and directed. In 1987, Aleks created the Hollywood Creative Directory because he needed a list of names and addresses where he could submit screenplays himself. What began as a fluke venture, HCD became one of the entertainment industry’s most well-known brands. Thirteen years later, Aleks sold HCD to iFilm.

Wade Gasque
Co-owner and “innkeeper” at theOFFICE for over 10 years, Wade is in the room most days overseeing the inspired and focused work environment for which theOFFICE is known. He coordinates theOFFICE Fellowship (a free membership awarded to one up-and-coming writer per year) and is a filmmaker (his narrative feature Tiger Orange is on Netflix, Amazon, etc), a Nicholl Semifinalist, Film Independent Fellow and a creative/spiritual guide for others.